The Players summary gives an overview of all the opponents you’ve ever played with. By default, it will only show the most recently seen opponents (today). You can change this filter to show more opponents (last 30 days or last 3 months), and you can use the search box to find a specific player. For each of the opponents, you can see their statistics,. You can left-click on a player to get detailed information in the top panel. You can double-click to drill down to a list of hands played against that opponent.

The Players summary is useful to find weak or strong opponents. If you are playing an opponent you already know, you can use the Players table to see hands you’ve already played against this opponent and find out how you can exploit this opponent. 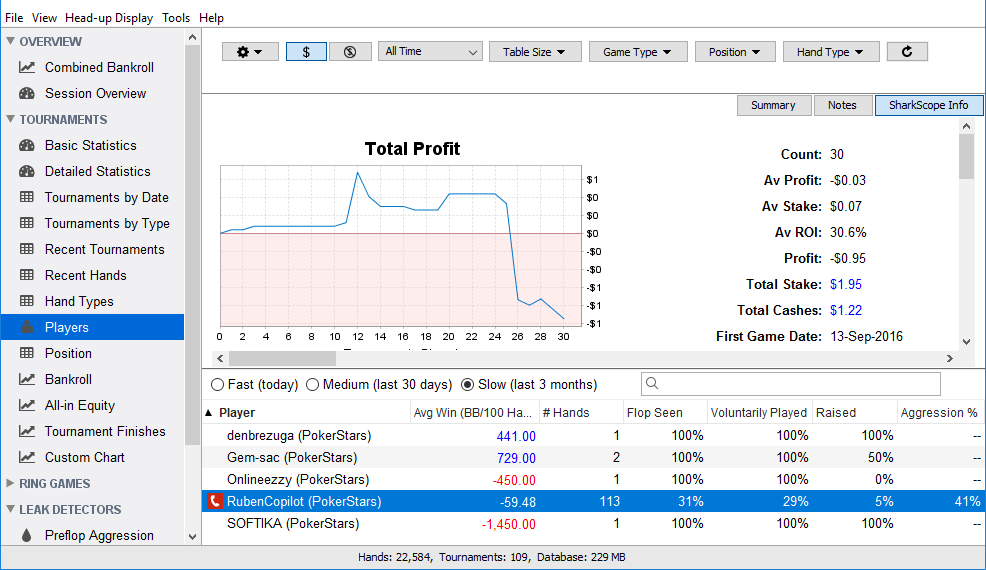 Why am I seeing no players in this table?

Above the list of players are three choices: “Fast”, “Medium”, and “Slow”. Only players who have played at least one hand during the selected period are shown.

So, with the “medium” filter, only players who played at least one hand in the last 30 days are shown. If you played no hands during that period, no players are shown.

The reason for this restriction is performance. Collating all the statistics for all possible players takes a long time, and was making this screen really slow for anyone with a large database. We tried various approaches to make it faster. We noted that no-one really wants to know about a player they haven’t seen in recent weeks/months. So we exclude all older players to keep the screen fast.